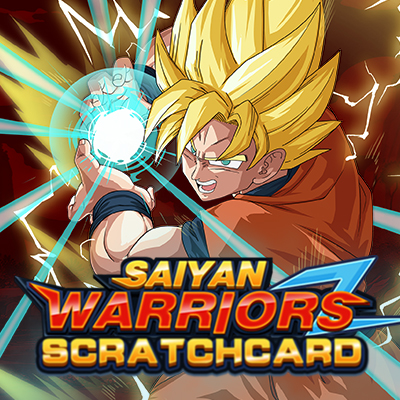 Saiyan Warrior is a new Dragon Gaming slot game that brings back the charm of one of the company's most popular slot games, but with a twist! The scratch card game is based on the same-named slot machine and features Gokou, Vegeta, Piccolo, and their foes Frieza and Cell, all of whom are beloved anime characters.Now it's only a matter of taking a gamble and scratching the cards your way to victory. The original scratch card game is set on Planet Earth, and it allows you to fight your way through the grid and spin the reels in order to win the war and defend your home. A 3x3 layout and various in-game characters are included in the scratch card game. All you need to do is match three identical symbols to get the rewards you want!Hitting the most rewarding combination will land players up to 500x their stake, which is a considerably hefty reward considering the premise of the game. In the original slot game, the high-paying symbols were the characters of the Dragon Ball-Z universe, and they have been retained in the scratch card version as well. This medium-high volatility scratch card game has an impressive 95% RTP and a convenient coin range of 0.10 to 0.20. Free Spins and Multipliers make for some of the rewarding features packed into the game. You may either each card to uncover the mystery beneath or wait patiently for a few seconds before the ten-second timer reappears and reveals the symbols for you in sets of three. The game can be played on desktops, laptops, tablets, and mobile devices alike, and is available in multiple languages for players from around the world.

Saiyan Warrior is a brand-new Dragon Gaming slot that reintroduces the appeal of one of the company's most popular games, but with a twist! The scratch card game features renowned anime characters Gokou, Vegeta, Piccolo, and their villains Frieza and Cell, and is based on the same-named slot machine.Now it's only a matter of taking a chance and scratch cards to reveal your fortune. You must fight your way through the grid and spin the reels to win the war and defend your home in the original scratch card game, which is set on Planet Earth. A 3x3 layout and a range of in-game characters characterise the scratch card game. To receive the prizes, all you have to do is match three identical symbols on the 3x3 grid!If players hit the most lucrative combination, they can earn up to 500x their bet, which is a significant payout given the game's principle. Dragon Ball-Z characters were the high-paying symbols in the original slot game, and they've been kept in the scratch card version as well.This medium-high volatility scratch card game is a winner, with a 95% RTP and a coin range of 0.10 to 0.20. Only two of the game's numerous intriguing features are Free Spins and Multipliers. You can either turn each card over to reveal the mystery underneath, or you can wait a few seconds for the ten-second timer to appear and reveal the symbols in threes for you. The game is available in numerous languages and may be played on PCs, laptops, tablets, and mobile devices by players from all over the world.