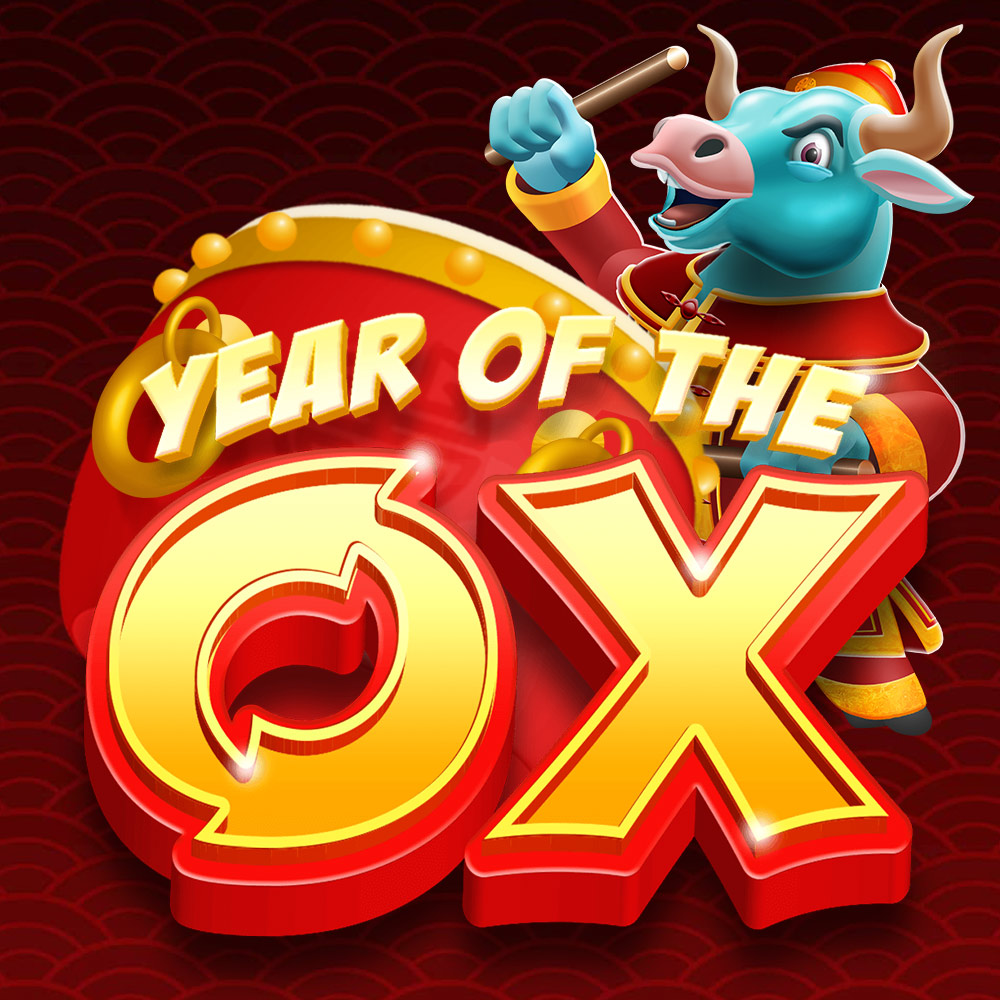 Year of the Ox

Year of the Ox by Genesis Gaming is a 3-row, 5-reels traditional video slot game that celebrates the Chinese New Year of 2021, dedicated to the ox. Packed with exciting and highly rewarding features like Double Wilds, Free Spins, Multipliers, AutoPlay, and more, the game also has attractive visuals and a catchy soundtrack to pair with. The central character is a blue-coloured ox clad in a sparkly red and golden outfit and beating a large drum. The reels in the fore display a range of symbols all associated with wealth and good fortune in the auspicious New Year, such as gold ingots and coins, red money bags, firecrackers, and more. Special symbols include the Firecracker Scatters and the Double Wilds.
The Scatters lend out 10, 15 and 25 Free Spins for landing 3, 4 and 5 symbols anywhere on the reels simultaneously. The Double Wilds can double the wins whenever they are part of the winning combination. Along with such highly rewarding features and an impressive RTP of 96% comes the advantage of an exciting gaming experience in the form of detailed graphics.

The 3-row, 5-reels standard format slot game of Year of the Ox is based on the theme of the Chinese New Year. Packed with an array of interesting features such as Double Wilds, Multipliers, and Free Spins, Year of the Ox celebrates 2021 with amazing graphics and a catchy soundtrack.Clad in a shiny red and golden suit, the blue-coloured ox is the centre of attraction in this video slot game and appears banging an equally adorned drum. In the backdrop is a Chinese-inspired wallpaper, complete with a moon window, hanging lanterns and a starry sky. The reels seem set within the entrance of a temple, displaying a series of symbols related to Chinese New Year celebrations, including firecrackers, gold ingots and coins, red money bags and fruit.
The banner above the reels reminds of the game’s bonus features, while also sending out messages for luck. At the bottom of the reels are the function buttons, while the bet button appears on the right. Year of the Ox also features the Auto-Play button, which one can use if they feel like gaining more control over the game speed. Coming to the symbols, the highest paying is the gold ingots, while the money bags and gold coins follow closely. Fruits are mid-range symbols on the reels while playing card symbols of A, K, Q, J and 10 pay out the least.
Landing three or more Firecracker Scatters on the reels triggers the Free Spins feature in the game, awarding players with 10, 15 and 25 Free Spins for landing 3, 4 and 5 Scatters. All wins made during the Free Spins feature also get a 2x Multiplier. Year of the Ox also features Double Wilds that appear on reels 2, 3, 4 and 5. If a double wild is a part of any winning combination, it doubles the win. The entire colour theme and appearance of symbols seem quite synchronised to lend off a festive mood overall.
While Chinese-inspired themes might not come across as novel, Year of the Ox manages to stand out for good reasons. With double wilds and double multipliers, the game also allows players to enjoy up to 20 free spins with a progressive multiplier. What’s more, the slot game has an impressive RTP of 96%, which means the game is both enjoyable and rewarding at the same time. This makes the fun-filled Year of the Ox a must-try for all slot lovers who are interested in trying something new.