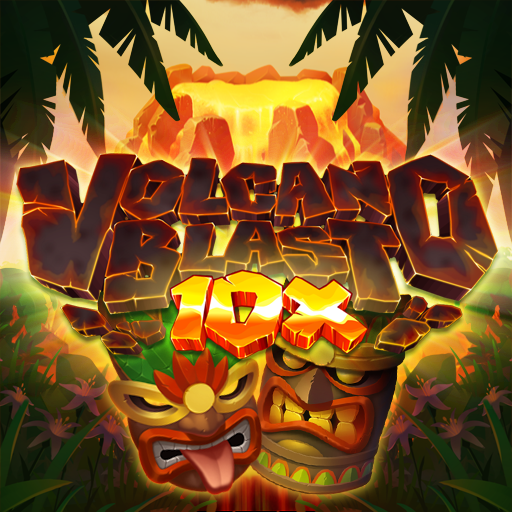 Volcano Blast, one of Rival Powered's most recent releases, transports players to an isolated Polynesian island where a massive volcano groans, grumbles, smokes, and shudders! Deep beneath this ballistic beast, a molten pile of wealth is straining to burst, showering the countryside with lava-covered loot that players can acquire in the form of increased payouts.Volcano Blast features a tropical flower, a luscious pineapple, cherries, mangoes, tribal tiki masks, and the distinctive 10x Magma Wild symbol on its reels. The classic slot has three rows and three reels and offers massive multiplication potential thanks to a single unique feature - the 10X magma Wild!
Landing one 10X Magma Wild symbol results in a payout of 10x the bet amount, two in a payout of 100x, and three in a payout of 334x the bet amount!
The beautiful orange red 10x volcanic blast sprinkles wealth on players on occasion, adding to their fortunes. Despite its low volatility and low RTP of 94.5%, the game manages to fascinate players, making this Rival Powered low volatility slot game a must-try.

★★★★★
Shannon L
blast of fun
I give this game a 5 star the graphics and the excitement of the bonus its hot!! cant wait to play again!

One of the latest offerings of Rival Powered, Volcano Blast takes players on an adventure-filled but precarious ride on a remote Polynesian island where a mighty volcano groans, grumbles, smokes, and shudders! Deep within this ballistic beast a molten mountain of riches is straining to erupt and shower the landscape with lava covered loot which players can amass in the form of multiplied payouts. Volcano Blast has an array of well-designed icons on its reels, including a tropical flower, a sweet pineapple, cherries, mangoes, tribal tiki masks, and the legendary 10x Magma Wild symbol. The classic slot follows a 3-row, 3-reel format and offers insane multiplying potential with a single special feature – the 10X magma Wild! Landing one 10X Magma Wild symbols wins 10x the bet amount, landing two shoots up the wins to 100x, while landing three brings a magnanimous treasure of 334x the bet amount!
Every now and then the bright orange red 10x volcanic blast showers riches on players to add to their fortunes. The game manages to lure in with its excessive prizes despite a meagre RTP of 94.5%, making this low volatility slot game by Rival Powered a must-try.