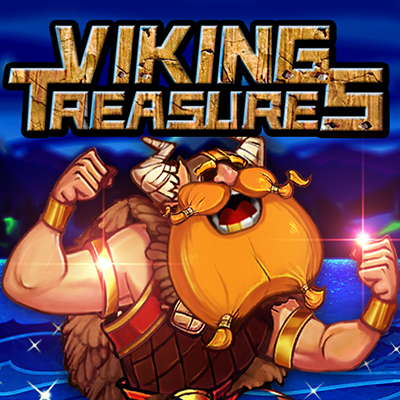 Viking Treasures by Qora Games has quickly emerged as one of the most refreshing and exciting new slot games on the horizon, with its 4-rows, 5-reels, and 50-paylines gameplay. Central to the game is the legend of the ancient warrior Vikings, as the game takes players on an epic adventure to uncover the hidden treasures of the ocean. A heavily bearded Viking holding a mug in one hand and an axe on his back is embarking on a new voyage, and the backdrop features massive sea waves and snow-capped peaks denoting the ruggedness of the landscape. The treasure chest Wild substitutes other symbols each time it appears, creating new winning possibilities for players, while the Scatter leads to Free Spins offering up to 50x payouts on line bets for you to try your luck. Whenever a Wild appears during a Free Spin feature though, it culminates in an exclusive Locked Wild Free Spin round.
Viking Treasures is a big hit not just for its immersive storyline and state-of-the-art animation, but also the massive prizes it offers and its characteristic fast-paced gameplay. With an impressive RTP of 96%, this high volatility game is a must try for those who seek high risks and high rewards out of online casino games.

Viking Treasures by Qora Games is a unique and refreshing new slot game based on one of the most favorite themes of the slot games universe – the legendary Vikings warriors. The concept, however, has gained an exciting new twist in this game in the form of a 4-rows, 5-reels, 50-paylines online casino slot game that takes the player on an epic adventure, not on land but over the high waves, brutal weather, and deep treasures of the ocean. The game begins with a heavily bearded and sturdy-looking Viking, with a mug in one hand and an axe on his back, setting out on a new voyage on his wooden ship. There are massive sea waves as well as snow-capped peaks in the backdrop, and the unique high-quality visuals of the game truly deserve much appreciation.
Each time you score a win, the Viking leans against a treasure chest, which then opens and scatters a few golden coins. Tentacles of a mysterious sea creature also make appearances every now and then, reminding players that a massive yet secret beast is lurking somewhere in the depths of the ocean.
The treasure chest represents the Wild symbol in the game and can replace all regular symbols whenever it lands on the reels to create new winning possibilities for players. It cannot take place of the Scatter symbol, which is represented by cross axes. This symbol gives a payout worth 50x your line bet for landing five of a kind symbols at once. The crossed axes symbol is also the key to unlocking a highly rewarding bonus feature named the Locked Wild Free Spins.
Whenever three or more Scatter symbols land anywhere on the reels in a single spin, players get rewarded with 10 Free Spins at once. If a Wild symbol happens to turn up on the reels during this feature, it will get locked in its position until you have used up all the Free Spin rounds. Unfortunately, this feature cannot be re-triggered during the same round.
Viking Treasures has emerged as a promising slot gaming option not just because of its immersive storyline and fast-paced gameplay, but also the state-of-the-art animation it boasts of and the huge prizes there are to bag. The game’s RTP at 96% is quite impressive, and this high volatility game makes for the perfect adventure ride for slot lovers who prefer high risks for high rewards.