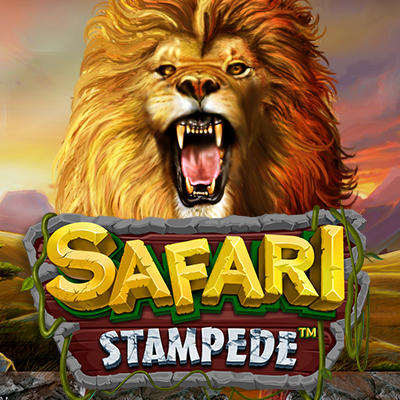 Safari Stampede by Qora Games is a refreshing and visually stunning take on the Great African Plains and their exotic wildlife diversity. The game features lavish illustrations, brilliantly detailed graphics, an engaging Afro soundtrack and novel sound effects that perfectly capture the African Safari vibes.The 3-row, 5-reels slot game of Safari Stampede comes with 10 fixed paylines. Symbols on the reels include the low paying playing card icons of Hearts, Diamonds, Clubs and Spades, besides higher-paying symbols of the elephant, rhino, gorilla and eagle. The lion is the Wild symbol on the game and essentially Pandora’s box of rewards; besides paying out on its own, the Wild can expand to cover the entire reel, can award Multipliers to the wins of which it is a part, acts as a Walking Wild to generate re-spins, and can replace all other symbols on the reels, other than the Scatter, to form new winning combinations. The Scatter, represented by pink crystals, offer both Free Spins and cash rewards.
With an RTP of 96.12%, Safari Stampede’s high volatility means that there are huge rewards to win home. Add to that the massive betting range from 0.10 to 90.00, and it seems there is something for every pocket size in this slot game.

Drawing from the beauty of African wildlife and its breath-taking diversity, Safari Stampede truly takes players on a safari amidst lions, rhinos, elephants, eagles and gorillas, packed with lots of adventures and rewards all the way. With brilliant graphics and tasteful design sealing the look and feel of the game, Safari’s Stampede’s experience is heightened due to its characteristic relaxing Afro soundtrack inspired by the music created for Lion King.It is among these beautiful creatures and engaging audio-visuals that the game unfolds. The 3-row, 5-reels slot comes with 10 fixed paylines, the coin value applied to each one. Symbols on the reels include the low paying playing card icons of Hearts, Spades, Clubs and Diamonds, as well as higher paying symbols such as the elephant, the rhino, the gorilla and the eagle, which keep appearing at random from time to time.
The lion is the Wild symbol in the game, which can replace all other symbols on the reels, except the Scatter, to form new winning combinations. It can also expand on the entire reel; in which case it is called a Stacked Wild Reel. Whenever the Wild is a part of a winning combination, it multiplies the win starting from 1x and going up to 5x on the fifth reel. The lion Wild also pays on its own; landing 3, 4 or 5 symbols on the reels will reward you with 30, 100 and 300 coins respectively.
The Expanding Lion Wild Reel also brings Free Re-Spins to the table, enabling it to “walk” to the right of the reels and disappear off the end with each spin. When the Walking Wild Reel first appears on reel 1, players are awarded four re-spins, while that on the last reel would generate a single re-spin.
Safari Stampede also features pink crystal Scatters that bring in both Free Spins and cash rewards whenever players land at least three of them simultaneously on the reels. Capped at a maximum of 12, the Free Spins can be retriggered even during the feature game. Combining all these highly rewarding features with the game’s impressive RTP of 96.12%. it is easy to surmise that Safari Stampede is a must-try. To top it all, the game has a coin betting range from 0.10 to 90.00 per spin, which is wide enough to accommodate all pocket sizes.