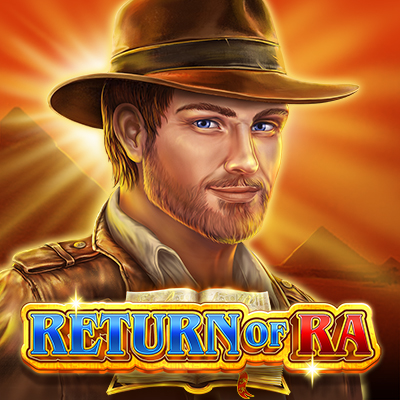 Return of Ra is three rows, five reels slot game by Saucify Gaming that takes its inspiration from the age-old Egyptian legends of the powerful pharaohs and their pyramids. As players are led deeper and deeper into the land of mysteries, they realize it is not just lore they are here for, but also massive rewards to take home.Reel symbols on Return of Ra include low-paying playing card icons of A, K, Q, J and 10, along with high-paying Scarabs, a beautiful young woman, an Explorer and the Tutankhamun. However, the catch is that each of these symbols has a dual nature – there are regular and special versions of each, the special one offering much higher rewards.
The Wild symbol has a similar fate and can substitute all other symbols on the reels when it lands anywhere on the reels, thus leading to new winning combinations. However, its special version cannot substitute selected special symbols. Wilds also end up activating the Free Spins bonus round, whenever they appear 3, 4 or 5 times on the reels in a single spin. Any visible special symbols can expand to cover the entire reel during the Free Spins round, bringing in more rewards.

Return of Ra derives its stunning visual appeal and overall theme from the age-old Egyptian legacy of pharaohs and pyramids, taking players into a hidden land of riches and jewels they had so far stayed aloof from. The all-new video slot game by Saucify comes with three rows and five reels, with a lofty pillared hall for its backdrop.It might seem that the most frequently appearing symbols on the reels are the playing card icons of A, K, Q and J, but there’s more to it. Other symbols on Return of Ra include the Scarab, a beautiful Egyptian woman, a sturdy-looking Explorer and Tutankhamen. However, each symbol on the reels, including the playing cards, the Wild and the other symbols, appear in two alternative forms – regular and special – the latter bringing in greater rewards.
During Free Spins, any visible special symbols expand to fill the reel, bringing in more rewards. Return of Ra had up to 27,500x coin wins to offer, giving you the right balance between thrill, rewards and entertainment that you needed.