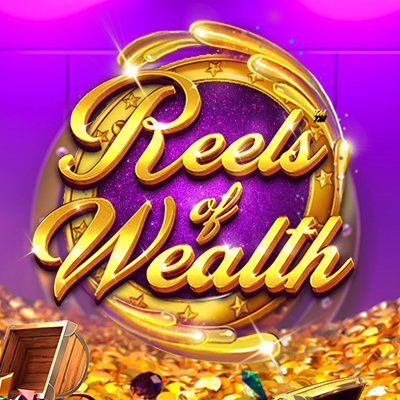 Presented by casino games provider Betsoft, Reels of Wealth is a standard 3-rows, 5-reels slot game that comes with 10 paylines. Surrounding the reels is an ornate gold frame, with stacks of precious metals, coins, vases and jewels peeping from behind them.Reels of Wealth features a blingy theme and comes packed with diverse game features such as Reel Re-Spins, Wild Multipliers, Scatter Pays, Free Games and a Megastar Jackpot – all leading to huge prizes in keeping with the name of this slot game. Symbols on the reels vary from low-paying cards A, K, Q and J to medium-paying coins, gold bars, emeralds, rubies and blue diamonds. The high-paying symbols include a pile of banknotes, a bag of jewels and a treasure chest.
Along with a special Wild symbol that doubles the base bet and creates new winning combinations, Reels of Wealth also features a unique scatter that pays out up to 2000x the bet on landing the maximum number of Scatters on the reels. The Megastar Jackpot and the Gambles feature are other highlights of the game, making Reels of Wealth a rewarding experience.

Casino games developer Betsoft is behind the exciting new slot of Reels of Wealth, which is a standard 5-reels, 3-rows and 10 paylines games. The blingy theme features several piles of riches not just in display but also for winning. Reels of Wealth features several exciting features such as Reel Re-Spins, Wild Multipliers, Scatter Pays, Free Games and a Megastar Jackpot while keeps up with its name and spirit in both its gameplay and theme.Surrounding the centrally placed reels is an ornate gold frame. Behind the same reels are stacks of coins, precious metals, vases and jewels. The reels display a variety of symbols, of which the low-paying symbols include playing card icons of A, K, Q and J. On the other hand, the reels also feature certain medium-paying slot symbols such as coins, stacks of gold bars, emeralds, rubies and blue diamonds.
The bag of jewels, a pile of banknotes and a treasure chest filled with riches are among the highest paying symbols on Reels of Wealth, rewarding players with 20x, 60x and 250x the line bet whenever they land on 3, 4 and 5 slots in the grid respectively. The gold and blue Wild double the base value of the prize whenever it appears, besides creating new winning combinations and rewards.
The Rolling Wins feature is the USP of Reels of Wealth and awards free reel re-spins after wins. The rolling wins can be re-triggered and may even generate multipliers upon consecutive wins. The huge vault door is the Scatter symbol on Reels of Wealth, and can payout up to 2000x the line bet if you manage to land 15 scatters on the reels!
To top it all, Reels of Wealth features a special Megastar scatter symbol, which triggers altogether new and highly rewarding gameplay. Landing 3, 4 or 5 Megastar scatter symbols results in 10, 15 and 25 free spins respectively. These get triggered on a new set of reels, featuring bronze, silver and gold coins with gold bars and jewels. Depending on what kind of symbols you collect, you can even add more winning combinations and win greater rewards.
Reels of Wealth by Betsoft comes with an RTP of 95.29% and an impressive betting range between 0.10 to 100, which means there is something for every pocket size. The unique gameplay has a lot of variety, including Progressive Jackpots and Gamble Features, which makes the game stand out from the crowd.