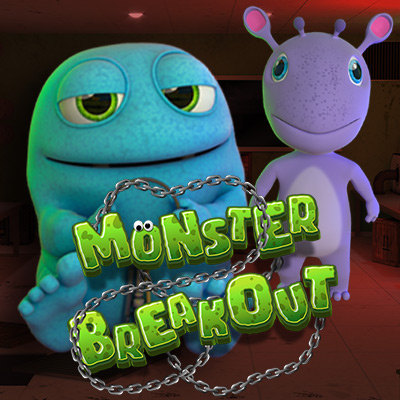 Monster Breakout by Saucify renders the popular perception of monsters as giant loathsome creatures untrue, and presents them as cute and cuddly beings instead, populating the reels and rolling around in brilliant animation. In terms of design and visuals, the Monster Breakout slot does fairly well. Apart from the cuddly monsters, the backdrop’s design featuring a bleak prison from which the monsters have broken out contrast it with the vibrant and colorful symbols on the reels seems quite well-crafted. The game’s RTP may not be very high, pegged at just 95.89%, but with the pleasing graphic renditions, a unique premise, and a convenient betting range between $0.01 and $37.5, the Monster Breakout slot makes for a fairly entertaining and rewarding online casino experience in one.

Contrary to out popular perception of monsters as giant loathsome creatures, Monster Breakout presents them as cuddly creatures rolling around and having some fun. These culprits can be seen digging their way out of the prison they were being held in I'd have come out in the open on the game’s reels. The prison or laboratory from which these monsters have broken out has a bleak look, quiet in contrast with the vibrant and colorful symbols on the reels. The brilliant graphics and animations have been suitably paired with an engaging soundtrack and audio effects.
Special features of the Monster Breakout slot include the wild symbol which is double high, which means that it takes two spots on the reels wherever it appears, creating new wins on multiple paylines simultaneously. There is also a bonus spins feature. Landing 3, 4 and 5 of these Scatters simultaneously on the reels in a single spin rewards players with 10, 15, and 20 free spins respectively. But that’s not all! All wins landed during the free spins round get automatically doubled in value.
The game’s RTP is slightly above the industry average at 95.89%. Monster Breakout has 30 fixed paylines over 5 reels, and players are free to choose the number of paylines they want to pay along with the value of the coins they bet on them. The coin betting range varies from $0.01 to $37.5, which is quite convenient considering the game can be played by both casual rollers and high stakers. The game offers a Max cash jackpot of $375 and a max coin jackpot or 1500. Though Monster Breakout is not heavy on features odd rewards, it can prove to be a highly entertaining slot game for those who are just looking to have some fun.