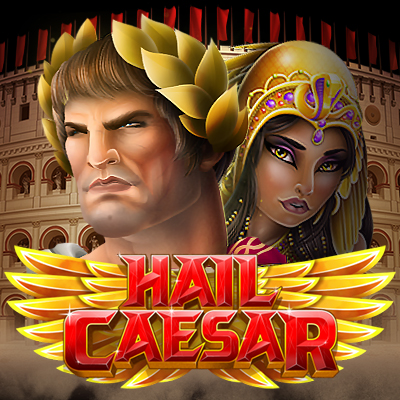 Emperor Julius Caesar and the mighty Roman empire are the subject of the innovative slot game Hail Caesar, which combines historical legends and contemporary slot games. The mediaeval era has been accurately portrayed by the game's designers. Players may expect a wealth of riches as they spin the reels amid the stunning Roman Colosseum.The symbols on the reels strongly align with the game's concept. These items also include a wolf statue, temple, bust, laurel, helmet, labrys, golden eagle, currency, chariot, and chalice, in addition to the intriguing Julius Caesar and the magnificent Cleopatra herself. The scatter symbol is the Roman Empire Eagle, while the bonus symbol is the Caesar Coin.
But the 3-row, 5-reel slot machine offers more benefits. There are many wonderful aspects in Hail Caesar. For instance, landing 3, 4, or 5 Free Spins scatters during the Roman Triumph Free Spins round awards 10, 15, or 20 Free Spins, each of which contains Sticky Wild Re-Spins.
As long as they only get two bonus scatters during the main game mode and not a third, the Roman Coin 2nd Chance Feature grants players instant respins. While the Scatter symbols are held in place, players are given another chance to trigger the Ideas of March Pick Bonus.
In this bonus round, players must face off against a group of assassins, which also fills their pockets with the largest imperial wealth down the line. The player keeps obtaining money from Romans until they choose a citizen who has nothing to pay.
The Hail Caesar slot machine features a very limited betting range of $0.01 to $2.50 and an overall RTP of 95.4 percent. Payouts are made from left to right in this low volatility game, which has a tonne to offer in terms of aesthetics, concept, feature-packed features, and awards.

★★
Jacey E
Nice Graphic, Terrible Payouts
I hit the free spins at max bet twice and received a total of $4.36. The best part about this game is the pick bonus, but its so hard to hit its not really worth spending money on this game.
★★★★★
Virginia V
Fun
Very fun and frequent bonuses! Love it. My new favorite game.
★★★★★
Ronnie b
Fun game
had a blast with my free spins

If you are a both a history and slot gaming buff, Hail Caesar by Rival is just the power-packed experience you were waiting for. While the illustrious Julius Caesar and his mighty Roman empire need no introduction, the game subtle depictions of the glorious medieval kingdom are glorious and majestic, to say the least. Players are in for bounties of wealth as they spin the reels at the awe-inspiring Roman Colosseum.The icons on the reels are heavily inspired from the game theme. These include a wolf statue, temple, bust, laurel, helmet, labrys, golden eagle, coin, chariot, and chalice, apart from the charismatic Julius Caesar and the gorgeous Cleopatra themselves. The Roman Empire Eagle denotes the Scatter symbol while the Caesar Coin is the bonus.
That’s not all there is to love about the 3-row, 5-reel slot game, however. Hail Caesar also comes packed with highly rewarding features. For instance, landing 3, 4, or 5 Free Spins scatters during the Roman Triumph Free Spins round triggers 10, 15, and 20 Free Spins respectively, which feature Sticky Wild Re-Spins.
To add to that the Roman Coin 2nd Chance Feature provides players automatic re-spins, provided they hit only two bonus scatters but not a third during the normal game mode. The Scatter symbols get held in place and players get a bonus spin, a second chance to trigger the Ideas of March Pick Bonus.
This special feature round gets triggered upon landing three bonus Scatter symbols of the Caesar Coin. The Pick-em bonus brings you face-to-face with a gang of assassins and load your purses with the biggest treasures of the empire. The player continues to collect cash from Romans until they choose a citizen who has nothing to pay.
Overall, the Hail Caesar slot game has an RTP of 95.4%, with a fairly narrow betting range from $0.01 to $2.50. Payouts are from left to right in this low volatility game, which has tons to offer in the name of game visuals, concept, power-packed features and rewards.