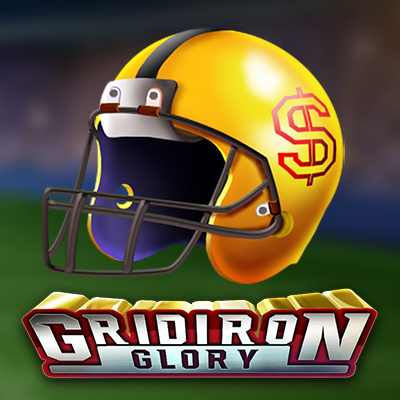 Gridiron Glory by Qora is based on the delightful sport of football, and offers a refreshing take on the conventional 3x5 slot games that we are used to playing. The game brings to life the vigor of cheering crowds, referees blowing their whistles, stadium live music and dancing cheerleaders - basically all the components that make traditional football games as lively and exciting as they are. Only this time, you view all this through a slot game window.The Gridiron Glory slot game can be played both for free and for real money, in case you want to get a hang of it before investing. Along with its brilliant graphics and sound effects, the game has some of the most rewarding features to offer, including bonuses, stacked Wilds, free spins and multipliers.
The low volatility game comes with a convenient betting size between 0.5 to 100, making it the perfect destination for low and high hitters alike. A yellow football helmet acts as the wild symbol for the game, and can replace all other regular symbols except the football scatter. While the wild comes with a stacking and an additional event feature to form new winning combinations, the scattered triggers free spins and multipliers for landing three or more of the same anywhere on the reels.
The free spins round also magnify the value of the cascading reels, first doubling and then tripling your stake. If you are lucky enough, you can even land 10 cascades in a sequence. All these features make Gridiron Glory the brilliant combination of high rewards and entertainment that it is.

★★★★★
Neal J
Fun Game
One of my favorite slots with many different ways to win, fun bonuses, and the falling lines make for exciting suspense.

Despite football being one of the most popular sports across the world, Gridiron Glory it's one of the only few slot games featuring it as their theme. This refreshing offering by Qora brings to life enthusiastic cheering crowds, referees blowing their whistles, live music in stadiums, and dancing cheerleaders - all the colorful elements of traditional football games as we know it. Only here, you will find them in the form of a three-row five-reel slot. Isn’t that exciting?Gridiron Glory can be played both for free and for real money, giving those players a chance who want to get a hang of the game first before investing their money into it. The sharp graphics and brilliant sound effects are paired with highly rewarding features of the game, including bonuses, stacked Wilds, free spins and multipliers.
Though the game is conventional in terms of its reel format, there is nothing conventional about its paylines, which are not fixed like a majority of slot games. Instead, Gridiron Glory offers 243 ways to win along with a symbol drop feature. This means that players do not have to land symbols across fixed paylines and can also win multiple times for a single stake. Each time you land three or more identical symbols anywhere on adjacent reels, you can score a win, immediately after which the winning symbols disappear and new ones dropped down to fill the empty spaces. This is the cascading reels feature, which is the highlight of the game.
Gridiron Glory might be a low volatility game, but thanks to such novel features it pays out prizes more frequently than most other slot games you have played. A yellow football helmet acts as the wild symbol for the game, and can replace all other regular symbols except the football. This wild can be stacked several high on a reel. There is also an additional wild event feature that gets triggered randomly from time to time. When triggered, one or two reels from the middle three get filled with a full height image of a football player in action, creating new winning combinations.
The football scatter pays 15 free spins and 5x multipliers for landing 3 on the reels, 50x and 20 free spins for 4 and 250x and 25 free spins for 5. During this round, the cascading reels attain an even greater value, first doubling and then tripling your wins! If you are lucky enough, you can even land 10 cascades in a sequence. With a convenient betting range from 0.50 to 100, one can safely call Gridiron Glory all game for all pocket sizes, low and high hitters alike.