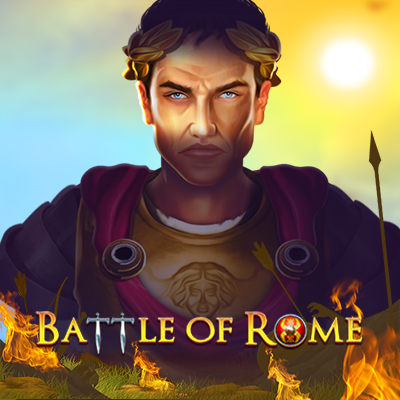 JACKPOT: View in game
5 out of 5 stars.
Log in to rate the game

Battle of Rome by Arrow’s Edge is in every way the paradise for those slot lovers who are seeking maximum thrill, maximum risks, and maximum rewards. The 3-rows, 5-reels video slot game is based on the theme of Roman warfare and legions, offering 6250 all pays, as players can win from both left to right and right to left on the reels. Besides the regular low paying playing card symbols of A, K, Q, J, 10, and 9, Battle of Rome boasts of the woman-shaped Wild that can substitute other regular symbols to form new winning combinations, the emperor Free Spins that bring extra spins as well as a collectible golden horse, and the Legatus Legionis bonus round to bag mystery prizes.
Players also have the Double Up feature in their hand to instantly double their winnings, but they might also end up losing it all with a single stroke of bad luck. With an RTP of 96.68%, bonus included, the high volatility game Battle of Rome offers a top fixed payout of a whopping 1000x, besides being linked to a highly rewarding Cash Grab progressive jackpot.

Battle of Rome by Arrow’s Edge is a thrilling slot game packed with an array of exciting features and based on the theme of Roman warfare and legacy. While it may follow a traditional 3-rows, 5-reels format, the game offers a massive 3125 ways to win, giving you a solid chance to plunder the spoils of the war as much as you can. In case you manage to put up a great show, you might even end up winning Free Spins granted by the emperor himself!While a regular winning combination will be possible only on adjacent reels from left to right, Battle of Rome allows players to also win from right to left, doubling the number of paylines by making them bidirectional! The game is linked to the Cash Grab progressive jackpot besides its regular fixed payout of 1000x for landing five Colosseum symbols on the reels.
Symbols on the reels include low paying playing card symbols of A, K, Q, J, 10, and 9, besides other special high paying symbols. Take the Wild symbol for instance, represented by a beautiful woman. This symbol can land on reels 2, 3, and 4, replacing all other regular symbols on the reels to form new winning combinations that you can draw prizes from.
Battle of Rome also boasts of other exciting features as well, such as the Legatus Legionis Bonus, which gets activated whenever four bonus symbols land on the reels. Players win an instant mystery prize, bagging plenty of money to continue in the game with. Landing three, four, or five of the emperor Free Spins symbols triggers the Free Spins feature, granting players 5, 10, and 15 Free Spins respectively. A special golden horse makes an appearance during this game and gets collected in a meter whenever it lands on the reels. You will need three horses to fill up the meter completely, doing which can earn you five extra spins!
You might want to activate the special Double Up feature after any winning spins to boost your payouts. Simply select your host – man or woman – and choose from their two coins. Choosing the correct coin will immediately double your winnings. You can even repeat this procedure five times in a row to bag maximum rewards. A word of caution though – one incorrect pick and you might lose all your winnings! With an RTP of 95.93% without bonuses and 96.68% with them, this high volatility game is a must try for those who like to ride to the highest win levels with slot gaming.