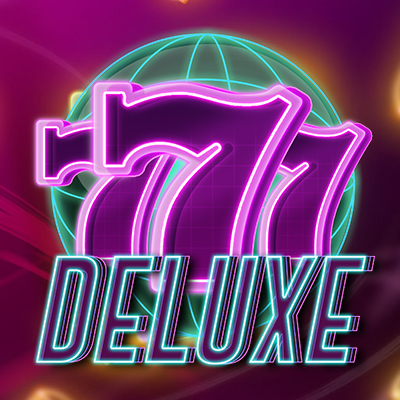 777 Deluxe slot game by Qora brings back the charm of 70s era slot machines with its simple yet rewarding gameplay combined with modern graphics and sound effects. The game takes players on a nostalgic ride to the booming casinos of Las Vegas. The reels have been designed to resemble the classic fruit slot machine with a blurry deep-space background, while the symbols have been given a futuristic twist with 3D neon visualization.Features in the game include Scatters, Multipliers, Bonus rounds and Progressive Jackpots. The 3 row, 5 reels and 10 fixed payline slot game can be won both from left to right and right to left along with the three middle reels.
777 Deluxe makes the most out of its simple gameplay. All the hologram style pay symbols in neon colors except the Mystery symbol appear stacked on all reels. The value of symbols increases as we go up from cherries, lemons, oranges, grapes, to melons. Premium symbols include the bells, horseshoes, bars and triple 7s. Landing five on a line can reward players with anything between 30 to 100 times their bet.
Special symbols include the Question Mark Mystery Scatter. Landing less than three mystery symbols will lead to the Scatter changing itself into any random symbol on the reels, while landing more than three will activate the bonus round. Here, you can play on a mini slot to keep adding more and more rewards to the progressive jackpot until you land a diamond symbol. With a comfortable betting range between 0.20 and 100, 777 Deluxe comes across as I must try if you want to experience the traditional casino experience well it's still bagging exciting rewards.

★★★★★
Devon L
Good game
Love this slot
★★★★★
Katie W
Fun
Nice to pass time by.
★★★★★
Jolanda B
Good game
Oooh zoo good game
★★★
Carrie R
Awesome
★★★★★
Kristina G
777 DELUXE!!
very fun and addicting!
★★★★★
William P
It’s great
good game
★★★★★
Ava W
love this game
Justin is so awesome. Ajay Devgn, $35, and I won 1000 love this game so much I play it every day.
★★★★★
marlisha` p
love itttt
this game has me flued to it since last night!!
★★★★★
adam p
Love and Hate relationship
I love and hate this game equally. Though I have the worst luck on this game and never seem to win, I find myself compelled to come back in hopes that this game will finally do me a solid. Not to say I haven't won anything, I do win small amounts occasionally. But every time I come back with high hopes, I leave feeling defeated as usual. You decide if this is your lucky slot, cause it sure isnt mine.
★★★★★
Joseph D
I love this game.
This game is rad. I've played it on a few different occasions and I'm really glad that it's now on sportsandcasino.com! The bonus is where it's at with this one!

Bringing back the charm of good old casino wonders, the 777 Deluxe slot game by Qora is based on the theme of 70s era slot machines. The game features classic slot symbols that we have always loved, combined with jazzy modern graphics and gameplay, taking players on a nostalgic ride to the booming casinos of Vegas. Quite interestingly, the game goes much beyond its visuals and theme to charm players with its highly rewarding set if features, including a progressive jackpot!Symbols on the reels include classic slot symbols like bars, bells, cherries, lemons, and of course the 7s, but all of them have been given a futuristic twist in the form of 3D neon Vegas signs. This gives the game reels a very futuristic digital edge replacing the obsolete mechanical configurations of older slot games. This is accompanied by a distinctive swanky tune that paints a clear picture of decked up high-rollers ready to sweep the entire casino off their feet.
The 777 Deluxe slot game relies on simple features and makes the most out of it. The reels have been designed to resemble the traditional fruit machine slot with a blurry deep-space background for contrast. All the hologram style pay symbols in neon colors except the Mystery symbol appear stacked on all reels. The value of symbols increases as we go up from cherries, lemons, oranges, grapes, to melons. Premium symbols include the bells, horseshoes, bars and triple 7s. Landing five on a line can reward players with anything between 30 to 100 times their bet.
The Question Mark Mystery symbol acts as the Scatter and can change into any other symbol if fewer than three of them appear simultaneously on the reels. If three or more Mystery symbols appear on the reels in a single spin, the bonus round gets activated. Players are led to a second screen with a mini slot machine consisting of only three reels and one row. The current progressive jackpot balance is displayed on the top. Pink, purple, green, blue, silver, red and golden 7s appear on the reels along with a diamond symbol. Players can spin indefinitely on this mini slot as long as they land either 3 matching 7 symbols or their combination. For each winning spin, players can expect rewards between 1x to 250x on their total bet. The progressive jackpot can be won upon hitting three golden 7s. The bonus round ends as soon as players land the diamond symbol anywhere on the reel.
The game offers a comfortable betting range from 0.20 to 100, which means it is befitting for all pocket sizes. The 10 fixed paylines on 777 Deluxe pay both left to right and right to left, as well as in the middle 3 reels. Overall, one can call 777 Deluxe as an interesting take on classic old slot machines and a must try for all casino lovers.